No 930AM online Talmud class today. We apologize for the late notice.

No 930AM online Talmud class today. We apologize for the late notice.
Posted by Rabbi Shlomo Yaffe at 4:47 AM No comments: 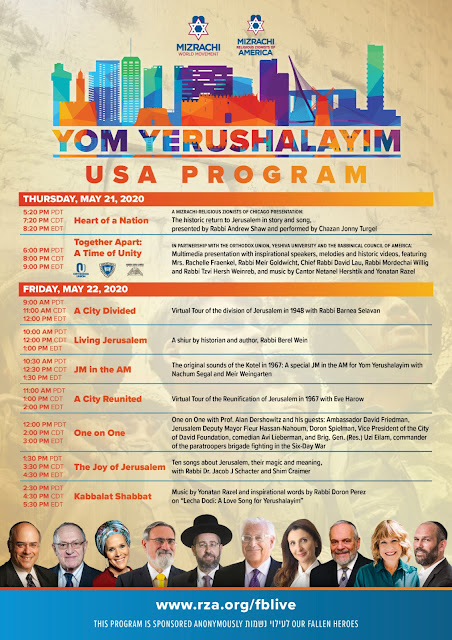 Posted by Rabbi Shlomo Yaffe at 12:16 PM No comments:


Posted by Rabbi Shlomo Yaffe at 5:34 PM No comments:

With great sadness, we report the passing of  a pillar of our community, Mrs.  Goldie Newman.

Her  family asked that we communicate the following:

Our beloved mother, Goldie Newman, passed away peacefully this morning, Sunday, May 17, (Iyar 23 5780) in her home, surrounded by love.

She cherished her connections with family, friends, and the synagogue.

Lag BaOmer is always on the 18th day of the month of Iyar.

The word “Lag” is made of of the Hebrew letters lamed (ל) and gimel (ג), which together have the numerical value of 33. “BaOmer” means “of the Omer.”

The Omer is the counting period that begins on the second day of Passover and culminates with the holiday of Shavuot, following day 49.

Hence Lag BaOmer is the 33rd day of the Omer count, which coincides with 18 Iyar.

What happened on 18 Iyar that’s worth celebrating?


The Talmud relates that in the weeks between the Jewish holidays of Passover and Shavuot, a plague raged among the disciples of the great sage Rabbi Akiva (teacher of Rabbi Shimon bar Yochai), “because they did not act respectfully towards each other.”

These weeks are therefore observed as a period of mourning, with various joyous activities proscribed by law and custom.

These weeks are therefore observed as a period of mourning, with various joyous activities proscribed by law and custom.

On Lag BaOmer the deaths ceased.

Also, Rabbi Shimon bar Yochai, who lived in the second century of the Common Era, was the primary author of the classic text of Kabbalah, the Zohar.

On the day of his passing, Rabbi Shimon instructed his disciples to mark the date as “the day of my joy.”

Kabbalists explain  that the final day of a righteous person’s earthly life marks the point at which all their deeds, teachings and work achieve their culminating perfection and the zenith of their impact upon our lives.

Customary foods for the day include carob (which miraculously sustained Rabbi Shimon and his son when they were hiding from the Romans) and eggs (a sign of mourning).

Normally field-days BBq's and bonfires ae held. Alas this year Due to Covid-19 -we can't.

If you would like to join us on zoom rather than facebook -and for the minyan it's only on zoom,

This has become necessary due to  cyberattacks on our zoom events

"playing shape" while we wait for the delayed minyan season to begin.

Tuesday and Wednesday 7AM

These classes will address common,interesting, relevant and important "why" questions that contemporary Jews ask about Judaism.

with the Rabbi of our Forest Park Minyan  - Rabbi Wolff
Posted by Rabbi Shlomo Yaffe at 6:40 PM No comments:


Times and pre- Shabbat services for this

Shabbat, the 14th and

An intro to Shabbat incorporating elements of the

We"ll have a short sermon also!

have an opening ark service, a short sermon and some other tefilot /prayers

Candle Lighting is at 7:39PM

The evening Shema and the counting of the Omer  (30) should take place after 8:35 PM

The Torah Portion is Emor , summary is at the end of this email

The evening Shema and the counting of the Omer (24) should take place after 8:35 PM

Shabbat ends  and Havdala is recited after 8:46 PM

"playing shape" while we wait for the delayed minyan season to begin.


Every Tuesday, Wednesday, Thursday, and Friday!

Friday 7AM  https://us02web.zoom.us/j/83864052924
Pesach SheniPesach Sheni means "Second Passover [Sacrifice]." It marks the day when someone who was unable to participate in the Passover offering in the proper time would observe the mitzvah exactly one month later.

It is customary to mark this day by eating matzah—shmurah matzah, if possible—and by omitting Tachanun from the prayer services. Because the Pascal sacrifice was eaten at night, it it is also customary  to eat some Matzah tonight at the Shabbat meal  (you can also have Challah or other breads -it's a custom -not actual Passover)History: A year after the Exodus, G‑d instructed the people of Israel to bring the Passover offering on the afternoon of the fourteenth of Nissan, and to eat it that evening, roasted over the fire, together with matzah and bitter herbs, as they had done the previous year just before they left Egypt.

“There were, however, certain persons who had become ritually impure through contact with a dead body, and could not, therefore, prepare the Passover offering on that day. They approached Moses and Aaron . . . and they said: ‘. . . Why should we be deprived, and not be able to present G‑d’s offering in its time, amongst the children of Israel?’” (Numbers 9:6–7).

In response to their plea, G‑d established the 14th of Iyar as a day for the “Second Passover” (Pesach Sheni) for anyone who was unable to bring the offering on its appointed time in the previous month.

What Pesach Sheni means to us today is that none of us in any point of our lives is  ever a ‘lost case.’”
Torah Portion SynopsisThe Torah section of Emor (“Speak”) begins with the special laws pertaining to the kohanim (“priests”), the kohen gadol (“high priest”), and the Temple service: A kohen may not become ritually impure through contact with a dead body, save on the occasion of the death of a close relative. A kohen may not marry a divorcee, or a woman with a promiscuous past; a kohen gadol can marry only a virgin. A kohen with a physical deformity cannot serve in the Holy Temple, nor can a deformed animal be brought as an offering.

A newborn calf, lamb or kid must be left with its mother for seven days before being eligible for an offering; one may not slaughter an animal and its offspring on the same day.

The second part of Emor lists the annual Callings of Holiness—the festivals of the Jewish calendar: the weekly Shabbat; the bringing of the Passover offering on 14 Nissan; the seven-day Passover festival beginning on 15 Nissan; the bringing of the Omer offering from the first barley harvest on the second day of Passover, and the commencement, on that day, of the 49-day Counting of the Omer, culminating in the festival of Shavuot on the fiftieth day; a “remembrance of shofar blowing” on 1 Tishrei; a solemn fast day on 10 Tishrei; the Sukkot festival—during which we are to dwell in huts for seven days and take the “Four Kinds”—beginning on 15 Tishrei; and the immediately following holiday of the “eighth day” of Sukkot (Shemini Atzeret).

Next the Torah discusses the lighting of the menorah in the Temple, and the showbread (lechem hapanim) placed weekly on the table there.

Emor concludes with the incident of a man executed for blasphemy, and the penalties for murder (death) and for injuring one’s fellow or destroying his property (monetary compensation).

© Copyright Chabad.org, all rights reserved.
SERMON will take place at the Pre-Shabbat Zoom service
Posted by Rabbi Shlomo Yaffe at 1:46 PM No comments:

Good evening
It is with sadness that we share with you the passing of Dr. Bella Kranzler Weisfogel, z'l, wife of the late Rabbi Alex Weisfogel, and mother of Dr. Debby Yarmush, Mrs. Rhoda Brandriss and Dr. Jerry Weisfogel.

Dr. Bella and Rabbi Alex Weisfogel z'l were married for over 64 years and served together as Rabbi and Rebbetzin of Congregation Kodimoh in the Springfield, MA community, for close to a half a century, nurturing orthodox Judaism in the U.S. at a crucial time in its development.
The funeral took place in Israel Tuesday morning, May 5. Her daughter, Dr. Debby Yarmush will be receiving condolence calls by phone (617 549 3016) from 2:00pm - 4:00pm and 6:00pm - 8:00pm or by email at  debbydmd@gmail.com. Shiva will be observed through Sunday May 10, 2020.
May Hashem console the Yarmush, Brandriss, Weisfogel, and Kranzler families among those that mourn for Zion and Jerusalem.

The Jewish Course of Why?

These classes will address common,interesting, relevant and important "why" questions

that contemporary Jews ask about Judaism.

also on https://www.facebook.com/bnai.torah.1
Posted by Rabbi Shlomo Yaffe at 5:43 PM No comments:

There are no classes and services on Monday 5/4.

On Tuesday 5/5 we have a full Schedule as follows:

If you would like to pick up your Talit and Tefillin or a would like a spare
Artscroll Siddur  for home use that we are happy to lend you, just contact Rabbi
Yaffe 617.595.6437 or rabbi@bnaitorahma.org


If you would like to pick up your Talit and Tefillin or a would like a spare
Artscroll Siddur  for home use that we are happy to lend you, just contact Rabbi
Yaffe 617.595.6437 or rabbi@bnaitorahma.org
Posted by Rabbi Shlomo Yaffe at 4:30 PM No comments: